From The Team Here At The Australian Islamic House, We Would Like To Wish The Entire Muslim Community A Blessed & Beneficial Ramadan InshaAllah. Below, You Can Find Our Calendar & Program For The Holy Month Of Ramadan… 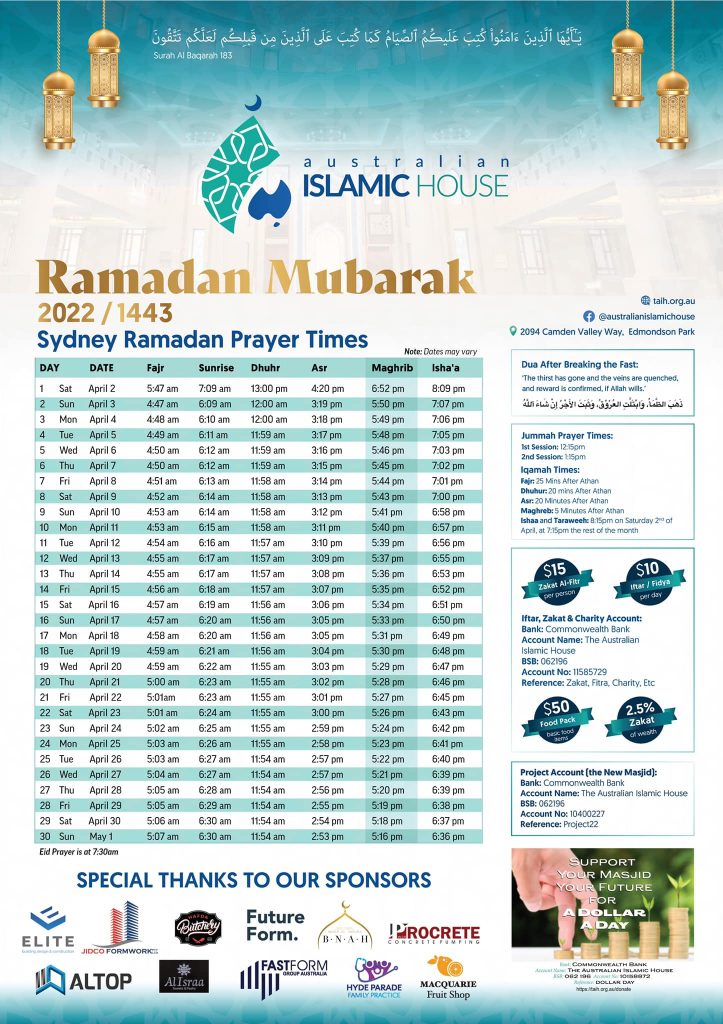 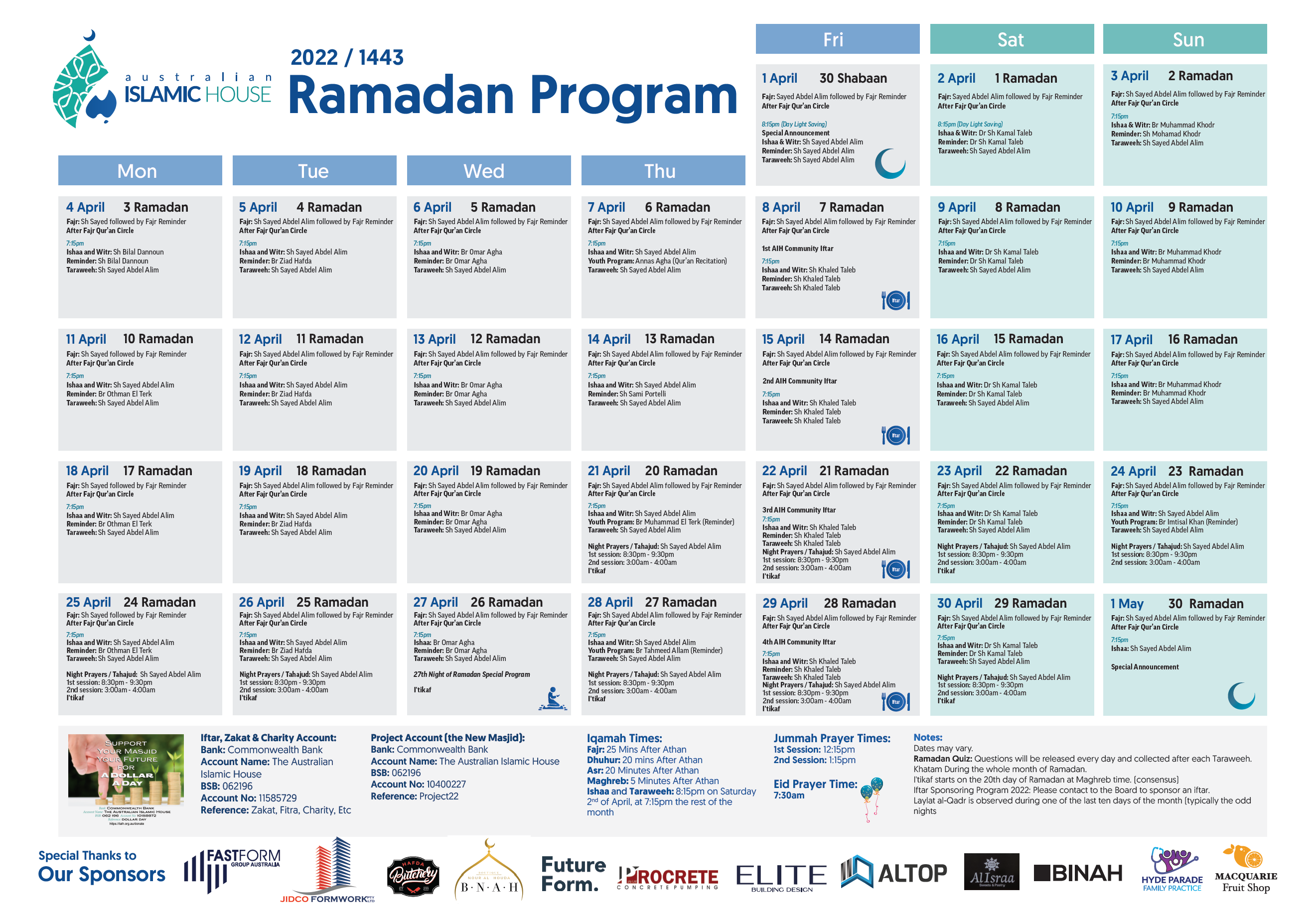 Ramadan, the ninth month in the Muslim calendar, is a special time for the Muslim community. As a most blessed month, it is a time for reflection, prayer and renewal of faith. Muslims worldwide fast from dawn to sunset, abstaining totally from food, drink, smoking and other sensual pleasures to complete one of the five pillars of Islam and to achieve greater self-discipline, self-purification, and compassion for those less fortunate.

The revelations from God to Prophet Muhammad that would eventually be compiled as the Qur’an began during Ramadan in the year 610 A.D., but the fast of Ramadan did not become a religious obligation for Muslims until the year 624 A.D. The obligation to fast is explained in the second chapter of the Qur’an: “O ye who believe! Fasting is prescribed to you as it was prescribed to those before you, that ye may (learn) self-restraint…Ramadan is the (month) in which was sent down the Qur’an, as a guide to mankind, also clear (Signs) for guidance and judgment (between right and wrong). So every one of you who is present (at his home) during that month should spend it in fasting…” (2: 183 & 185)

Compassion – When one does not eat or drink at all during the day, you feel in your body what the poor and hungry go through. Thus social responsibility is introduced into one’s conscience through religious acts.

Renewed Focus On Spirituality – During Ramadan, Muslims are encouraged to engage their time in reading the Qur’an and offering extra prayers at night.

Character Building – In the state of fasting, anti social habits are forbidden. E.g. backbiting, indulging in foul speech, telling of lies, losing one’s temper, etc. Perhaps the greatest practical benefit is the annual lesson in self-restraint, patience and discipline that can carry forward to other aspects of a Muslim’s life such as work and education. Abstention from food is only one step to make a man realise that if he can, in obedience to Divine injunctions, abstain from that which is otherwise lawful, how more necessary it is that he should abstain from that which is evil and temptation.

Social Interaction - Muslims are encouraged to share their food with family, friends and neighbours during the time they break their fast.

Laylatul Qadr, the Night of Decree or Night of Power, is one of the most sacred nights in the Islamic calendar. It takes place in the last ten days of Ramadan and was the night in which the Qur’an was revealed to the Prophet Muhammad (peace be upon him).

Allah says in the Qur’an, “The Night of Decree is better than a thousand months,” (Qur’an, 97:3). The Prophet (peace be upon him) said, “Whoever prays on Laylatul Qadr out of faith and sincerity, shall have all their past sins forgiven,” (Hadith, Bukhari and Muslim).

Sincerely praying for forgiveness, reciting the holy Qur’an, sending salawat (blessings upon the Prophet) and offering optional (nafl) prayers are examples of beneficial acts of worship on these nights.

The exact date of Laylatul Qadr is unknown, although it is thought to occur on an odd night in the last ten days of Ramadan (e.g. the 21st, 23rd, 25th, 27 or 29th night). The Prophet Muhammad (peace be upon him) said, “Seek it in the last ten days, on the odd nights,” (Hadith, Bukhari and Muslim).